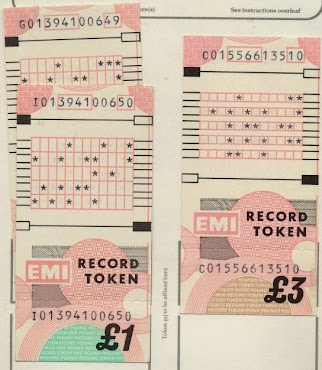 As it's coming up to Christmas I thought I'd remember the once popular EMI Record Token. Something your Grandma bought you for a Christmas present or perhaps a birthday. So you could use it to buy "one of those pop 45s from the hit parade". At one time universally accepted in most shops their boom sales period came at Christmas time.
Pick yourself a card from the gondolier, tell the assistant in the shop how much you want to spend and hey presto you've done your Christmas shopping for someone you couldn't be bothered to spend any more time on.
From my memory working in a record shop they were very popular. You ordered as many tokens as you wanted from EMI but had to be careful how you sold them. Because you were charged up to and including the first token that was redeemed or the last token you sold. So if you had a pack of 20 and you sold number 20 first, once that token was redeemed you were charged from 1 to 20.
They came in £1, £5 and £10 donations and you could then lick and stick as many on as you liked onto the card.
The problem was, a percentage of the sale went to EMI (obviously). And the beginning of the end came when major stores like Woolworths and WH Smiths stopped accepting them and doing their own. A sensible idea really when you think that someone could also buy the token from you and spend it somewhere else.
But I always thought that was the beauty of these things. A token you can give to someone and let them shop anywhere with . Not quite the same as an iTunes or Google Play token. 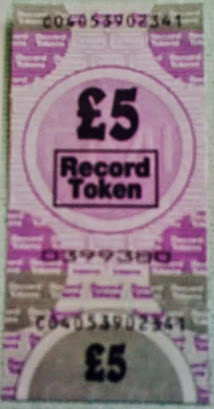 Oh my word I was clearing out a cupboard just today and I found one of these a pound tokens in the original EMI card . Are they worth anything I wonder cant use it that's for sure lol